Restore and Lift your
Breasts with a Breast Lift (Mastopexy)

"I went to his office for a consultation and knew right away he was the doctor for me. He was honest, understanding and most of all, he listened to me."

A breast lift (mastopexy) is a surgical procedure to raise and reshape sagging or drooping breasts as a result of natural aging, pregnancy or breast feeding.

Voted one of America’s Top Surgeons in the field of Cosmetic Surgery by Consumer’s Research Council of America. Dr. Pey-Yi Kevin Lin is a board certified plastic surgeon in Chicago who emphasizes tailored care and treatment to each individual patient.   Dr. Lin is skilled in both Plastic and Reconstructive surgery and completed his fellowship at the University of Texas – Health Science center at Houston. There he trained under nationally renowned aesthetic and reconstructive surgeons, gaining valuable insight and an unparalleled experience. His interest lies in body contouring procedures to help patients reach their desired body shape.

What is a Mastopexy?
The medical term for a Breast Lift

This is a cosmetic breast procedure designed to lift a “droopy” or ptotic breast. The procedure is different from a breast augmentation in which the breasts are simply enlarged with an implant.

A mastopexy can be done in conjunction with a breast augmentation in which case the procedure is know as and augmentation-mastopexy. 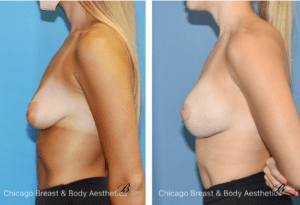 How do I know if I need a Breast Lift?
Here are a few reasons you may consider a breast lift...

If you have significant ptosis, or drooping of the breast, where the nipple is at the bottom of the breast or below the infra-mammary crease, you will likely be a candidate for a breast lift.

The purpose of the lift is to restore the nipple-areolar-complex and inferior pole of the breast back up above the infra-mammary crease. During your evaluation, your surgeon can evaluate the degree of ptosis (I-IV) and tell you if a lift is recommended. What is Ptosis and what causes it?
Simply put, sagging Drooping of the breast, or ptosis, is defined as having the nipple and areola as well as breast parenchyma (breast tissue) falling below the infra-mammary fold.

Ptosis typically occurs following pregnancy and breast feeding, but can also occur after weight loss, or with aging. Sometimes breasts can develop with congenital ptosis, such as in cases of tubular breast deformity or breast constriction. There are varying degrees of ptosis and it is generally graded from I to IV.

A Non-ptotic breast with zero ptosis, has the nipple, areola and parenchyma (glandular and fatty tissue which make up the breast) sitting ABOVE the the infra-mammary fold (The crease below the breast). Patients with non-ptotic breasts do not need breast lift. An augmentation with implants will give a great aesthetic result.

Grade I ptosis is considered mild drooping where the nipple-areola lies AT THE SAME LEVEL of the infra-mammary fold and the parenchyma below it. Patients with Grade I ptosis usually do not need a breast lift. An augmentation with careful sizing and profile choice as well as well-thought-out placement will usually give a great aesthetic result.

Grade II ptosis is considered moderate drooping in which the nipple-areola lies BELOW the level of the infra-mammary fold but remains above the lowest hanging (or most dependent) part of the parenchyma. Patients with Grade II ptosis will usually require a breast lift.

Grade III ptosis is severe sagging in which the nipple lies well below the infra-mammary fold and lies at the bottom of the breast, at the lowest hanging part of the parenchyma along the inferior contour of the breast.

Parenchymal maldistribution occurs when the breasts develop in such a way that there is very little breast tissue in the lower pole, and the nipple-areola are sitting at the bottom of the breast mound. the distance between the nipple to the infra-mammary crease is shortened and the areola may be unusually wide. This anatomy is seen in cases of constricted breast or tubular breast development.

How is a Breast Lift or Mastopexy done?
Here are some of the techniques: A mastopexy is surgical procedure in which the nipple-areola are moved back to their position above the infra-mamammary fold.

The excess droopy breast tissue in the lower pole is partially removed and the lower part of the breast is reconstructed.

There are several different types of mastopexies depending on the degree of ptosis and anatomy. Each type of Mastopexy leaves a different type of scar.

Will there be bad scars after a Breast Lift?
There are always scars with surgery, but:

Surgery cannot be done without scars. Mastopexies do leave scars on the breast as outlined above.

However, the breast is an amazing structure in that it is very forgiving of scars if the incisions are done correctly without undue tension and no infection or inflammation occurs.

The scars will fade over time and eventually may become almost invisible, but there will always be at least some faint scars with a Breast Lift. How long does a Breast Lift procedure take?
Usually 2-4 hours

The length of the procedure will depend on the amount of tissue being removed as well as whether or not an implant is being placed at the same time, such as in augmentation-mastopexy. Typically, a mastopexy will take between 2 to 4 hours with another hour added. Where is a Breast Lift performed?
In a surgery center under general anesthesia.

Breast Lifts should be done in an accredited surgery center or hospital. It is done as an outpatient procedure typically where you should be able to go home the same day, often an hour or two, after your procedure.

Does a Breast Lift hurt?
There will be some discomfort

With any surgery, you have to expect some discomfort. Typically a breast lift does not involve excruciating pain and most patients are relatively comfortable without pain medication within a few days.

Our surgeons typically use a long-acting, extended-release bupivicaine to anesthetize the area for 48-72 hours.

Will I lose nipple sensation after a Breast Lift?
It's a low risk

Some numbness of the nipples can occur immediately following a breast lift, but this almost always temporary. Some women report increased nipple sensitivity. It is a risk to lose nipple-sensation, but the risk is low.

Can I still breast-feed after a Breast Lift?

There is a risk that you may lose the ability after a Breast Lift, since the nipple-areola are re-positioned. However this may depend on the technique and pedicle used, and the amount of dissection around the important ducts. In most but not all cases, patients are still able to produce milk and breast feed even after a breast lift. What is recovery like after a Breast Lift?
Here's how the timeframe goes:

After a breast lift you should expect to be able to walk the same day or next day. Most patients are back to work within a week. How much does a Breast Lift cost?
It varies from case to case

The cost of a breast lift depends on many factors, including the skill and experience of the surgeon, the geographic region, the type of breast lift, or whether implants are used.

At Chicago Breast & Body Aesthetics, we offer competitive all-inclusive pricing including monthly specials and discounts. We also offer multiple options for financing to accommodate almost any situation or budget.

Breast Lift Before & After Gallery

Seeing is believing and our before & after gallery is second to none, with thousands of surgeries, and zero serious complications, it’s no wonder our Chicago Breast & Body surgeons are among the Top Breast Lift surgeons in Chicago.

The Time Is Now, Begin Your Transformative
Journey to a Happier, More Confident You Today! OTHER SERVICES YOU CAN GET WITH YOUR BREAST AUGMENTATION